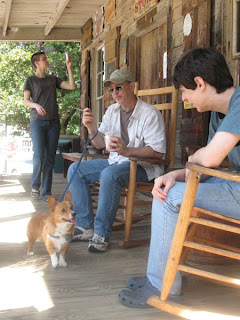 Last week, the family all mounted our communal automobile and spent a couple of days in the Georgia Appalachians. This began as a request from my young bride, who has dealt rather well with my obsession with the salt waters of the earth for the past 22 years. Our normal vacation spots have been Walt Disney World and Edisto Beach, South Carolina. But since I currently have no job, and we have little cash to spare, a true vacation was pretty much out of the picture for this year.

A few weeks ago, The Boss said we should run down to Helen, Georgia and spend a night, then kill a day seeing the sights in and around town. If you have never been to Helen, it is a smallish tourist spot that was experiencing a slow and painful death until the late 1960s, when the town deciders opted to put some Bavarian cosmetics on the tiny burgh and remake it into a sort of false-front Alpine resort. The efforts paid off, and during the summers and Oktoberfest, it is a busy place full of people from foreign lands like New Hampshire and Oklahoma, who come to eat German delicacies such as Wienerschnitzel, and drink lots of beer.

Historically speaking, my young bride had spent her childhood summers on Lake Burton, near the town, attending Camp Cherokee For Girls (notice that there is no attached link; that's because the camp doesn't exist anymore). She made many friends there, up to and including Emily Saliers of Indigo Girls. I, on the other hand, visited Helen once in Oktober of 1982, where I first discovered Beck's Beer, the best mass-produced beverage on the planet.

We began our trip down by cutting through Cleveland, TN and hitting US 64. We stopped for lunch at a Subway between Cleveland and Benton, and bought the only gas we required for the entire journey (have I bragged about my hybrid lately?) at the attached fuel emporium. We then wound our way up the Ocoee River, stopping at one point near the dam just to browse and relax for a spell. We then went through Copper Basin, which is still recovering from the sulfuric acid poisoning of the old mining operation, then slowly made our way through northeast Georgia until we came to Helen.

Luckily, The Boss had done some research before she planned the trip, and found an inexpensive place for us to sleep. The Quality Inn, on Yonah Street, snuck up on me such that I passed it and two more streets before I could turn back. But I finally found the parking lot, and we got checked in. Before I forget to mention it, I'll add now that we took The Boss's puppy, Doris Daylily, our Welsh Corgi. While she can be a handful sometimes, she is a sweet dog, and the motel is pet friendly. The people who work there were all very homey, and they -- to a person -- went on over the dog, and rubbed her tummy to make her feel special.

We got our bags unloaded, and I got settled in to watch the Bones re-runs on USA. Afterward, we walked about and found where we would eat dinner. The Café International serves a variety of foods, but mostly it's Bavarian fare with outdoor seating. This is my favorite eatery in Helen, although there are better places. I enjoy the dining over the Chatahoochee River, and the general atmosphere. I had the Wurst Platter that evening, with knockwurst, bauernwurst, and German potato salad. My young bride found the potato salad too vinegary, but I really liked mine. If it weren't for acetic acid and cayenne pepper, I'd probably stop eating.

After dinner, we walked for a bit, though most of the stores were closed. I also visited the local grocer, Betty's IGA, which was right next door to our motel. There I found some ear plugs which, after years of working swing shift and sleeping during the daylight hours, I now require just to feel comfortable enough to sleep at all.

The next morning, the first thing I discovered was that a major event had taken place in the space/time continuum. My young bride was already awake, and had taken the puppy for her morning walk. This is not so much abnormal as it is freaky; I kept waiting for Herr Einstein to show up, strolling upside down along the ceiling, counting the black holes in the universe while humming Rocky Top. But I recovered, took a shower, and partook of the Continental Breakfast that was available at no charge in the Motel lobby.

The breakfast was better than many. There were individually packaged Lender's Bagels, as well as fruit danishes, bear claws, various cereals, margarine, cream cheese, a microwave and a toaster. I didn't know where to start. But again, I recovered, and chose a bagel and some microwavable oatmeal. I took my selections back to my room where we had a microwave also, and The Boss had brought our personal so we could have our Coffee AM Kenya AA.

After that I took Doris for another walk, The Boy and Emily explored, and The Boss planned our day; our first move was to book another night at the motel, for which I had been lobbying since we had discovered that the word Quality in the title was not wasted.

We then headed for The Old Sautee Store, which appears to have been there since man has walked upright. My young bride had me purchase some Swedish Hushallsost Farmer Cheese with flat bread to accompany it. The cheese went into the cooler which had conveniently found its way into our trunk. There is a small sandwich shop next door that advertised frozen cider, of which I took note.

Our next leg was to head toward Lake Burton and the former site of the revered Camp Cherokees For Boys and Girls. The Boss drove around the area, lamenting the loss of such quality entertainment and education for young people. I'm fairly certain one cannot experience the same lessons via or PS3. There is now a collection of McMansions along the shore of Lake Burton where the boys camp used to be.

Money talks. I'm not against the concept, but sometimes the spirit is applied poorly.

We next headed up to Wildcat Creek to take a gander at what was always called "sliding rock" by the campers. This is a small falls area on the creek, with a place that serves as a perfect water slide (about an eight foot drop) from the upper area into a deep pool below. We were going to slide there, but there were a couple of gentlemen fishing, and it was a tad chillier than we had anticipated. We walked about, however, and Doris enjoyed smelling everything up and down the dirt road along the creek.

Our next stop was an old pottery vendor. The Boss says that for her mother, The Old Sautee Store was an absolute when she was in the area; for Amos, it was Mark Of The Potter. The shop is on the banks of the Soque River, where gigantic trout hang out to be fed at $0.25 per handful, and the owners don't allow anyone to fish for the piggish icthians. We admired some of the wares (I, especially, am taken with pottery mixing bowls, of which I have many, acquired through years of hanging out at yard sales and flea markets), and I eventually bought a new butter bell for our kitchen, which is a good deal larger and prettier than the old one. It will hold a whole stick of our creamy, unsalted butter.

After that visit, we made our way back to Helen, where we ate lunch at the Hofer Café and Bakery, which smells like Heaven ought'a. I had the Schnitzel Delight, a breaded pork cutlet, fried and served with Hofer German potato salad and steamed broccoli. -- and a Beck's beer, natch.

After lunch The Boss and I napped while my children did whatever it is they do these days. When we had recovered from our morning activities, we walked up into town again and bought some fudge at the Hansel And Gretel Candy Kitchen. I tried some immediately and found it to be fairly good, especially the plain chocolate. We walked about some more, looking at all the shops that were totally uninteresting. I postulated to my young bride that -- if I were a photographer -- I would have a tintype shop with Heidi costumes and lederhosen instead of all the cowboy fare that has nothing to do with the Alpine part of the world.

We decided to try dinner that evening at The Farmer's Market Café, which promised traditional southern foods. They were right, and we ain't talkin' Cracker Barrel, neither. I had a homemade chicken pot pie, the crust of which was flaky and crisp. The go-withs were fried okra and fried green tomatoes, and both were very good. Our waitress was attentive without being bothersome, and I had absolutely no room for dessert. After returning to our motel, I fell asleep very early.

The next morning I had another bagel along with blueberry muffins from the continental fare. After gadding about the downtown area some more, we got checked out of our quarters and headed for the Anna Ruby Falls trail. This is a short 0.4 mile hike to the waters that form Smith Creek in the Unicoi State Park on Trey mountain. Smith creek comes forth at the falls where Curtis Creek -- a 153 foot drop -- and York Creek -- a 50 foot drop, join together. It is not a difficult hike at all, and the weather was cool and pleasant. Doris seemed to enjoy her part of the activities, which consisted of keeping her nose glued to the Earth so she could smell all of the dogs, 'coons, and other critters that had recently passed by.

After our morning hike, we found our way back to The Old Sautee Store. The Boss had them play the Nickelodeon for us, and a woman at the "jewelry" counter nearly drove her to distraction with her prattling. I, personally, took the opportunity to acquire one of the frozen ciders at the market next door. It was a muscadine combo of some kind and was delicious and refreshing. I sat on the porch with Doris Daylily, lording it over the rest of the planet until time for lunch.

We inquired at the Hofer Café about sitting outdoors so that we could have the dog accompany us. They were very accomodating, and took our order, then knocked on the front window when it was ready. This time I had a Brat on a bun, with brown mustard and sauerkraut, the way God intended Bratwurst to be eaten. I highly recommend this place to folks who visit.

After lunch, everyone walked about town some more, though we had seen everything more than once. Honestly -- speaking for myself -- there's not a lot to do in Helen, other than eat. For entertainment, I recommend getting out of town. Most of the shops are T-shirt and hat vendors, and, let's face it, it's not really Germany, after all. I enjoyed the trip, but mostly because The Boss knew where to go and what to do.

And now we're home, and I'm back to the reality of unemployment and looking for anyone who might hire a person of my background and temperamental nature. But yes, it was good to get away for a few days. I am refreshed, and less negative in my outlook. I think it was the beer.

Posted by Wesley Loftis at 8:51 AM